The most recent member of the “our archives are more valuable open than closed” group among the traditional media is Sports Illustrated, which has opened the SI Vault. You can now read 54 years of Sports Illustrated history at your leisure.

One thing that few know about me is that I am wild about fantasy baseball. One of my longest-standing and best fantasy baseball friends recently confirmed what we’d all suspected for a long time: he has entirely too much time on his hands.

Just kidding! But Jason has been blogging for the past few months – It is about the money, stupid and doing a very very good job of it. He’s taken to the form like a fish to water, and if you follow baseball even a little bit, you’ll definitely enjoy it. 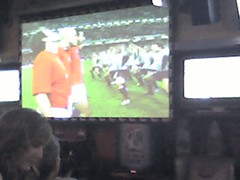 
As seen on the big screen TV at Champs this afternoon. New Zealand lost, shockingly, 20-18.

The 2007 edition of the Rugby World Cup started today in Paris with France bowing to slight underdogs Argentina in a stunning upset.

In Canada we’ve always had pretty good access to games on television in the past. I think every game in every World Cup has been shown on one of the sports networks over the years. But not this year. In 2007, in Quebec, you cannot get RWC 2007 coverage at home via cable, analog or digital.

The rights holders are a company that no one here ever heard of before a few months ago called Setanta Sports, which in turn Videotron, my local cable provider, doesn’t carry. I could get it through Bell ExpressVu, except that would mean a) installing a stupid mini dish and b) taking a whopping package of channels I don’t want – and THEN buying Setanta as an additional pay channel, or the RWC as a PPV option. Not bloody likely.

It looks like my only real option – and it’s a pretty crappy option, if you ask me, is to buy games that will be streamed over the internet – in the tiny screen – for US$10 a shot. Today I went down to my friendly neighbourhood sports bar – Champs, on St-Laurent – and they’re charging $10 a head per game as well… and the guy who I spoke to said that for some games they might charge $20! The kicker? It’s not the bar who’s collecting – Setanta is charging the cover themselves!

So, if you’re a rugby fan in Canada, things pretty much suck right now, and Setanta – and the International Rugby Board, which sold them the bloody license – seem squarely to blame. The rights for such an important competition should be limited to established broadcasters with a national footprint, not fly-by-night companies who have no interest in promoting a sport in a developing country but trying to juice it for everything it’s worth, notwithstanding the long term health of the game.

The NHL is finally doing

what they should have been doing for a long time – making all of its games available to view on the Internet: NHL on Google Video. So now I can watch the Habs any time, even though CBC would have us focus exclusively on the Leafs. Check out some of the classic games as well.