Yet again I’m on the move. Not from Montreal! But I have returned to the consulting life, and I’m very excited – my services are on the market again. One of the great side-benefits so far: spending the afternoon with Nadia out and about in the city (rather than behind some desk).

around here but I haven’t had much time to blog about it. Last week I started a great new gig here in Montreal, and Friday night Nadia and I bought a place to live in when we get back. This is the place (ground floor): 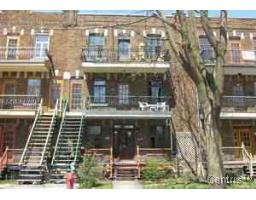 We move in at the end of June, so between now and then, I’m borrowing a friend’s apartment on Av du Parc and commuting back to Ottawa on weekends. I miss Nadia and the dogs already!

it’s now official – je reviens à Montréal! Or, I should say, nous revenons à Montréal. As of this week our house in Ottawa will be on the market, we’ve been looking at places in our beloved Plateau Mont-Royal for a few weeks, and I had a second interview for a really great job this morning and I am extremely optimistic that an offer is going to follow at the end of the week.

The only sticky issue will be that I will likely have to be in Montreal for work before we’re entirely set up in our new abode, so I’m also looking for somewhere to rent a room for a month or so (in May). Suggestions and offers to mboyle [at] mikel.org!

Update Apr 12: the offer I was hoping for did come through and I start work on April 30. I have had a couple of nice offers of space to stay for a few weeks and I’ll be following up on those shortly. Thanks for all the well wishes!

On my way out to dinner tonight,

I heard on the radio that Ryan Larkin has died. Larkin was a gifted artist – a film animator – and tormented man who finally succumbed to brain cancer following years of abuse. I’ve written about Ryan a couple of times before here, and he was a fixture around my community in Montreal for as long as I can remember.

My most poignant memory of Ryan is from Oscar night 2005, when the short film about Larkin won the Award (though I tactfully left this out of my post about that special night). The bar was packed that night, and there were many people from the film world in Montreal as well as a pack of the Copa regulars, who all knew Ryan because he spent time there almost every day. At one point, all of the excitement was clearly upsetting the poor guy, and he walked by a friend of mine that he knew and quietly asked if she could help him get out of there. It was all – the attention, the alcohol flowing so freely, the cheering and the crowd – simply too much. Ryan Larkin was a sensitive, tormented man, and we are all the poorer for his passing.

One of the chief Chowhounders

made it back to Montreal and enjoyed himself: Montreal – The Chowhound’s Promised Land. Some of the most serious gushing I’ve ever read about any city’s cuisine. I’ve been to all of those places often (I lived within 5 minutes’ walk for years) and he’s bang on – and the funny thing is, he only visited one “name” restaurant in the piece. [via Kate]