Yesterday Kate posted a link to this CBC historical piece on the real Suzanne of Leonard Cohen’s “Suzanne” fame.

“Unfortunate RSS Accidents” is brought to you by Aaron Straup Cope, blogger extraordinaire and, recently, an unparalelled mover of house and home. Aaron’s made a recent post about “Things I like about San Francisco”, which is fine. Unfortunately, though, his RSS feed sends only headlines. So if you read his feed, you would have seen the following: 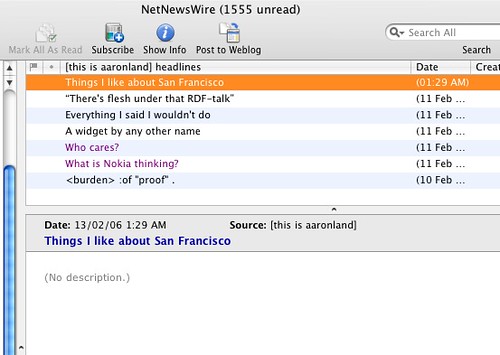 Not exactly what he meant, I don’t think!

Being a long-time skier

and one-time ski racer, the Winter Olympics is a highlight every 4 years that it rolls around again. I am most interested in the alpine skiing events, but I can’t help but get interested in all of the pomp surrounding the event as well. Since the 1998 Winter Games in Nagano, special attention has been paid to the Canadian team’s uniform. That year, and in 2002 (as well as in the Summer Games), Roots has set the bar pretty high, eschewing the traditional (silly) faux-native themes for a slick collection that was the talk of the Games. This year, the contract went to the Hudson’s Bay Company, one of the oldest retailers in the world – but a company that has been mired with problems and was recently sold to an American investor.

I’m really curious to know how HBC got the contract, because the clothes are in stores and the reviews are in, and it’s pretty clear that a) The Bay was overdue to be sold, b) the company has been reduced to little more than a discount store that has no business trying to design an original line, and c) someone thought, incorrectly, that re-creating the success Roots had should be a pretty simple job.

I visited the HBC Olympic shop around Christmas time, and I can personally attest to the fact that although HBC managed to retain some sense of style around this year’s Olympic uniforms, they obviously had little clue about what they were doing. Once you see the clothes up close, it is obvious that they have been manufactured with the absolute cheapest junk materials they could source. The nylon in the ski jackets has no “hand” at all and is shinier and more plastic than anything I have seen since the 70s. The “fleece” toques are not made with anything resembling quality polar fleece, and the logos are in some kind of rubbery substance that will clearly crack and peel within weeks.

Hopefully the sale of HBC will help it reclaim its status in Canada – because if the Olympic line was a Hail Mary pass to try and reclaim some relevance, it will likely be a major failure.

Matt Haughey describes the difficulties he encountered when trying to give himself the ability to encrypt email: It’s the user experience, stupid. Very early on in my internet life I started using PGP and, as Haughey does, I periodically revisit the subject and assess how far things have progressed. As he reports, however, things haven’t progressed very far.

My most recent foray into encryption and such occurred a few weeks ago when I downloaded and tried the free GPG system. I found that not only could I not use my old key pair (though I still know my old password) but I couldn’t easily find out why, nor could I figure out a way to address the issue. So now there is a public key out there in the wild – a key of long standing and signed by several other people – with my name on it but with totally out-of-date email addresses attached to it and nothing I can do about that.